You might safely assume that the title of this blog post means “Long Live Verto360.” After all, it’s written by Verto360’s CRO and posted on Verto360’s website that expounds all things Verto360.

But here’s the thing. Verto is the Latin verb that translates into English as “to change or to alter” and since change is a universal constant that pops up whether we want it to or not, the translation I had in mind when I wrote this title was “Long Live Change.”

Humans are surrounded and afflicted by change and yet we’re ill-adapted to predicting change, let alone adapting to it.

Predictions, from Armageddon to where the markets are headed or to what the next fashion trend will be usually range from pure fiction to being consistently imprecise. In short, wholly unreliable.

To complicate matters, our species is ill-equipped to deal with change. We tend to make the decision to adapt to change only after realizing that the house is on fire — aka when it’s too late to check if the smoke alarm is working.

The one area where we do a better job of at least predicting the future of change, if not adapting to it, is in the tech arena. I suspect this is because by the time a particular technology comes into general use it’s been around for a while. After NASA funded research to develop LED lights to grow plants in space it took 30 plus years for the lights to become the defacto way that we as a society, push back the night.

Current forecasts relating to the IoT (Internet of Things) predict a world of a trillion sensors and ubiquitous AI (Artificial Intelligence) within a decade. Yes folks, coming to your neighbourhood real soon, ready or not.

Ours is a world of unprecedented change with technology driving that change forward at ever-increasing breakneck speeds. These changes are having a dramatic effect on how we learn, work, communicate and entertain ourselves.

The upshot of this is that we can no longer afford to wait for the future to happen and then change. We have to set ourselves up for change.

We have to gear up for change, now.

To illustrate: given what we know about the social determinants of health we know that the time to make healthy lifestyle choices and changes are now, not 5, 10 or 20 years in the future when we receive a dire diagnosis.

Likewise, NOW is the time to be rethinking design and investing in how we build to adapt to future technologies that will drive changes in behaviour.

That means killing certain practices, like trucking yet another pile of drywall and construction garbage to the landfill just so we can start building all over again, only to find that by the time we’ve re-designed something and re-built it, we’ve once again set ourselves up for the dire diagnosis that it will be ill-suited to our changing needs.

Don’t just take my word for it. The graph below prepared by McKinsey & Company shows just how far behind key industries in our society have fallen in their ability to adapt to technological change. Government, Health Care and Construction are in need of disruptive change in order to avoid becoming dinosaurs. 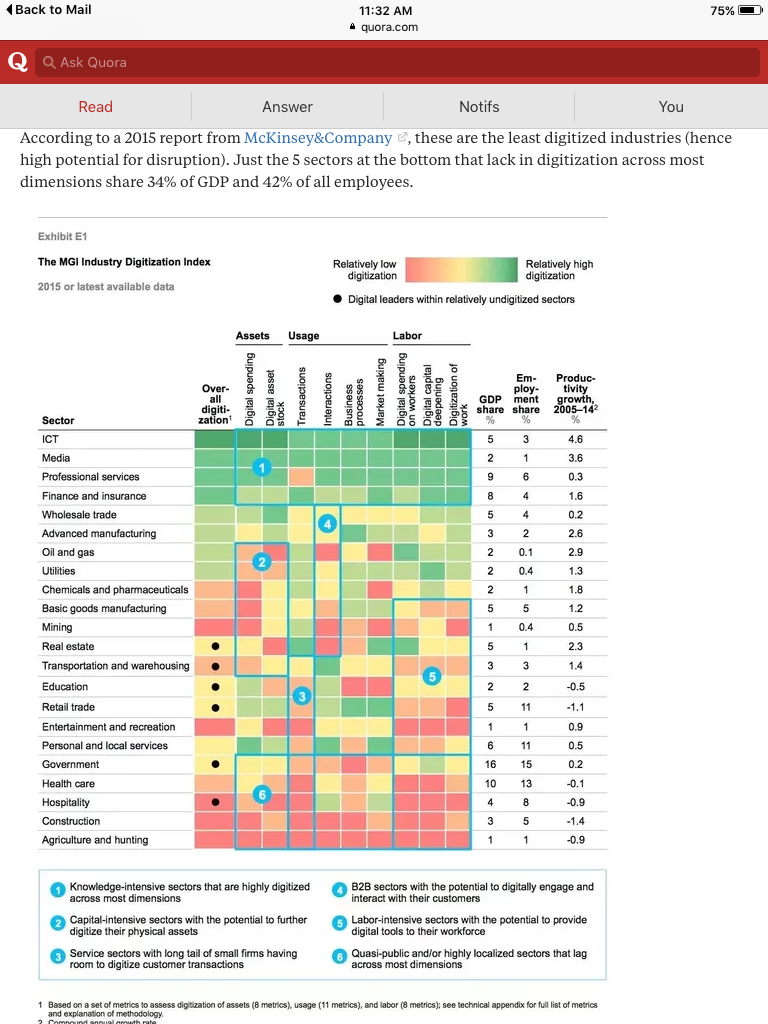 At Verto360, our tagline “Designed for Today, Built for Tomorrow,” isn’t a throwaway notion. It’s our vision of the future. And it is our mission.